Dostoïevski to his brother… "Send me the Qur'an!"

Great hearts always meet what they have made. It is important that you do not leave ignorance leads you, hatred blocks your way and make you blind, and intolerance overcomes your mind.

Prince Bismarck said that as he was to be in charge of the affairs of the country, he went to read and study all the Heavenly Books but did not find in any one of them what he was looking for until he came across the Qur'an. The enemies of Islam who claim that this book is the 'saying' of Mohammed, say that such integration and magnificence emanated from a human brain while they overlook the facts and trample on hatred – which contradicts science and wisdom.

Furthermore, I am proclaiming that Mohammed is a wonderful person, excellent and unmatched… I am sad because I did not know him, " O Mohammed! What you learned and communicated is not from you…It is a pure revelation of God, and any denial to this is as denying the books of science which is ironic. The world never and will never ever witness someone like you…I bow to your presence with love and respect. "

Dostoevsky wrote to his brother from the prison: " I will you meet my brother soon, I feel that my soul is transparent and wonderful at this moment, the future, the whole future is for me, and I can envision what I will be doing, as if it were now achieved in front of me," said Dostoevsky, I am satisfied with my life – please send me a copy from the Qur'an." Fyodor Dostoevsky, the famous Russian philosopher was not the first nor the last lover of Qur'an – he inherited its timeless meanings to build his country's renaissance; indeed, to build a whole great nation derived from its wisdom and its precious verses to fight the darkness of a long time.

Great people deal with the Qur'an without limits, they love Qur'an because they found solutions to different issues they encounter in their life.

Before Dostoevsky, the most important French philosopher of enlightenment, Voltaire, was making Europe a new future and writing about the new social order during era of European darkness. He used to stand against those making insolents about Qur'an saying: "I repeat to you, ignorant fools, who were convinced by other ignorant people that the Islamic religion is a sensual religion, this is very false, you were deceived in this matter, just as you were deceived in many others". Researchers followed the thoughts of Voltaire, who was abundantly inspired by Mohammed, they found it is clear how the former admired the Qur'an. Such a finding is not strange to this immortal philosopher wherein loving and feeling dazzled by Qur'an having been common amongst wise individuals.

Goethe, the father of modern Germany, himself found in the Qur'an, a way out of the trauma of the Thirty Years War and violent parts of European History. For instance, Goethe drew his vision of world literature and in the story of Abraham in the Qur'an during his journey in searching for God. Further, Goethe found an opportunity to move from the love of the universe to the love of the Almighty Creator by affirming: "this Qur'an attracts one in a short time and makes him fascinated by each time he holds it, because the style of the Qur'an and its contents are categorized by perfectness, powerfulness and nobility.

Further, if you listen to its verses, you will be struck by admiration and love; and after you go into the study of the spirit of its legislation, you can only magnify and sanctify this Supreme book. When Goethe was seventy years old, he announced publicly that he intended to celebrate a reverence for that holy night in which the Holy Qur'an was revealed to the Prophet Mohammed (peace be upon him) - this is how the great people deal with the truth. The scientists also acted after him in the same way, for instance, the American Michael Hart, simply declares that Qur'an is the predominant book of all books as every Muslim believes so.

In order to be honest with yourself, you must express what you know and what you love without leaving others to stop you because that is the whim of the human soul. Suffice you a moment of impartiality and honesty to love the Qur'an as loved by all of those who read it. Further, the German philosopher, John Jacobsite teaches us this by his expounding words. He states, " who did not read and learn about the Qur'an will make false claims about it, yet if they learn it and study the linguistic and other significant aspects of Qur'an and Prophet Mohammed's teachings they will say: O Messenger of God, take our hands and make us honored by considering us from your nation. "

The misery of life cannot hide the light of God and His words, even if the Muslims did not do their job properly in carrying this light – as Turki Dakhil confirmed: " the Qur'an was not applied by Muslims and Arabs strictly, and hence that is why women are still being oppressed and persecuted for example. If the Qur'anic light is the regulator of the lives of Muslims, there will be no suffering from dearth, poverty, oppression, and other calamities; instead, affection and compassion will spread all over the world. " (Reference made to Qur'an, Chapter 31 verses 26-27). 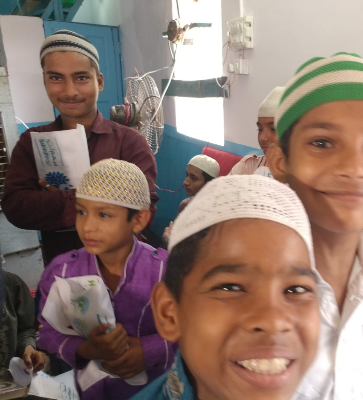 In India, the love of the Holy Qur'an is limitless

Our journey to New Delhi in July 2018, to witness the distribution of the Holy Qur'an in schools, universities and Islamic centers, was almost similar to the stories of Sindbad and his marvelous travels in the wonderland.